I hope you don’t have plans to shop at WalMart on Christmas day, because it won’t be open.

Yes, it’s shocking; I know. You’d think a great American staple such as WalMart would be open to cater to the WalMart-loving public on Christmas, wouldn’t you? Although I suppose the fact that it will be closed shows just how American WalMart really is.

Most locations of the country’s largest retailer, Walmart (especially its Supercenter hypermarkets), are open continuously except on Christmas Day, unless local laws dictate otherwise. Many stores in the U.S., such as the Meijer hypermarket chain, will in fact advertise “Open 24/7 364 days a year,” implying that the store is open at all times except Christmas Day. Other hypermarket chains tend to follow Walmart’s lead, although not always remaining open around the clock (hours such as 7 a.m. to 11 p.m. are common). [source]

WalMart stores are most likely open on Christmas Eve, however, with limited hours. If you must visit WalMart this holiday week, be sure to call and make sure they’re open before you head out.

I guess after we’re done ripping through our presents and drinking gallons of egg nog on Christmas day, we’ll just have to be content with the People of WalMart website. 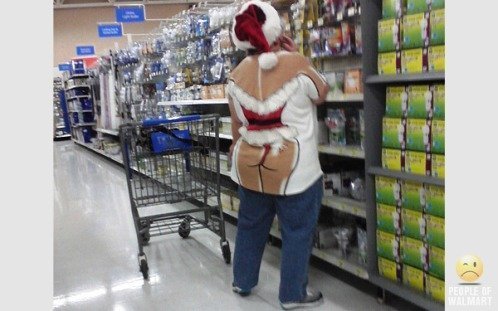