Home
Hollywood Gossip
Cameron Diaz Says Yes To Love, But No To Marriage 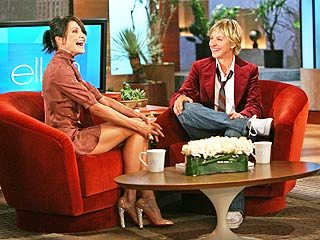 Cameron Diaz, 34, is commitment-phobic and doesn’t want to get married, or have kids. She has also admitted that she doesn’t even want the responsibility of caring for a dog.

Yesterday on The Ellen DeGeneres Show, Ellen brought up the subject, saying, “When [Justin] was on the show I asked him if you were going to get married.” To which Cameron responded, “I saw that. You know the answer to that, Ellen. I’m a commitment-phobe. Don’t want to do it.”

Good for you, Cameron Diaz! It’s about time someone in Hollywood made such a statement. She and Justin Timberlake, 25, have been dating for four years; which in the world of Hollywood is quite a long time. However, in the world that I live in – the world where partying every night is more likely to end your career, and not launch it – four years is a drop in the bucket.

Almost every day it seems another Hollywood couple is splitting up. Cameron Diaz is smart. Why should she marry Justin Timberlake just because they’ve been dating for four years? More likely than not, the marriage wouldn’t even last half as long. And if she has commitment “issues”, she’s really smart not to get married. Commitment-phobe + Marriage = Divorce.

My parents dated for five years before the subject of marriage came up. My sister married her husband after eight years of dating. These numbers seem natural to me. But I am not a member of Hollywood, where aging is accelerated, so perhaps my views are a bit skewed when it comes to that world.

I totally respect Cameron Diaz’s choice not to get married, and think that it shows her to be a mature woman who knows what she wants – and knows what she doesn’t want.

Back in September, when Justin Timberlake was on The Ellen DeGeneres Show, Ellen jokingly addressed engagement rumors saying, “I need to know, should I get a bridesmaid dress now or not?” In response, Justin remarked, “Know what? Go ahead and reserve one. The only thing is, you’ll have to stay the same size for the next 15 years.”

It sounds like Justin is okay with Cameron not wanting to get married. Why isn’t everyone else?