There’s been an interesting development in the case of Sandra Cantu’s kidnapping and murder in Tracy, CA.

Sandra’s accused killer Melissa Huckaby has been tied to a January report of a 7-year-old girl being taken to a park for 4 hours and returned to her family high on muscle relaxers.

From the Tracy Press:

The January report alleges that someone took a 45-pound blue-eyed dark-haired girl to a park. The woman and the child were gone for four hours, from about 1:30 to after 5 p.m., according to the police log. The woman who took the girl drove a purple Kia Sportage, according to the report.

Police towed a purple Kia Sportage registered to Huckaby the day after farmworkers found Sandra’s body inside a suitcase dumped in a dairy lagoon.

The police log also noted an officer said the girl might be with a mobile home park resident’s “granddaughter.” Huckaby until her arrest lived with her grandparents, Clifford Lane and Connie Lawless.

When the woman — apparently Huckaby — returned the girl, the family took her to the hospital. A doctor found benzodiazepines — a muscle relaxant — in the girl’s bloodstream, the police log noted.

Melissa Huckaby is due back in court on April 24th where she will enter a plea – one of not guilty, I’m sure.

Some other Sanda Cantu / Melissa Huckaby articles from the Tracy Press:

Huckaby told friends she was raped 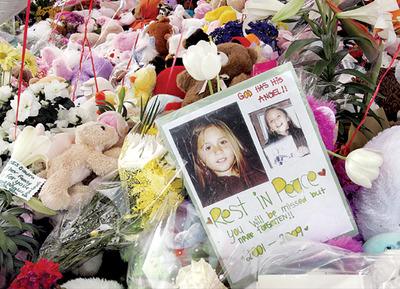