Home
Random Thoughts
Did You Hear The One About The Swine Gang?

I am really starting to see a worrisome trend within the animal kingdom recently. Both wild and domestic animals are defying Mother Nature and exhibiting great angst against the human race. I guess it was just a matter of time. One could argue that the more man evolves and progresses and becomes “smarter”, the more the animal kingdom seeks revenge. There are a whole slew of animals that are now extinct because of the human race. Extinct — as in never ever coming back. Oh sure, there are many species of animal that were defeated in the survival of the fittest game and were lost to the world without the help of mankind. Man “not so” kind is more like it. Now is the time, it seems, for the animals to fight back.

My observation of obscure animals began with the hermaphrodite deer. Then came the deer with seven feet, then the calf with two faces. Now my interest includes vengeful creatures. Today we venture across the Atlantic Ocean to England, then down to Australia.

A police spokesman in Norfolk, England told Reuters that a local farm worker was taken to the hospital after a sow knocked the 51-year-old man over, prompting the other pigs to attack. “It seems that when he fell, he was attacked by one of the sows and then the other pigs joined in,” the spokesman said, “He suffered bumps and bruises and a head injury though it is not considered to be life-threatening.”

Police said that this is the first time such a thing has happened in Norfolk, and the herd will most likely not be destroyed. Until they’re needed for bacon, that is. Okay, I added that last part.

Now we travel down to Australia where there were two separate incidents recently in which crocodiles attacked two men while they were swimming in a remote area.

Local news is reporting that the first attack took place last Saturday when 27-year-old Kerry York was swimming in a river crossing in the outback Northern Territory. He told Australian Broadcasting Corp. radio that the six foot saltwater crocodile bit him on the neck, chest, and left arm. “I waded into the water up to my shoulders and, yeah, then a crocodile grabbed me from underwater,” he said, “I didn’t even see the croc. I just felt it grab me and it took off.” After the initial shock of it all, York was able to keep his wits and “got out of the water quick then [he] climbed back on the crossing and got some rags and put some pressure on it and stopped the bleeding.”

On Monday, in the Torres Strait off Australia’s most northeastern tip, a ten-foot long crocodile attacked Jeff Tanswell, an off-duty police sergeant, as he snorkeled with his police constable wife, and two co-workers.

According to a police spokesman, Tanswell, 37, was “attacked from behind by the crocodile, which grabbed him by the head and shoulders and pulled him under the water.” He went on to say that “the crocodile surfaced soon after and Tanswell’s wife was able to place their boat between them and rescue her husband while the crocodile swam to deep water.”

Fortunately, Tanswell only sustained injuries to his face and ear, and was released from the hospital after treatment.

There are tens of thousands of crocodiles living across northern Australia, and over the last 20 years, the prehistoric beast has been responsible for killing about a dozen people.

The crocodile attacks I totally understand. There’s a reason the creature has really sharp teeth and has survived for thousands of years. The pigs on the other hand, caught me a bit off guard, but they are very smart animals and I would even venture to bet that the gang of swine planned their attack. Hmmm, I wonder if any of the pigs are named Old Major, or Snowball and Napoleon.

If you don’t know what that is in reference to, you need to read Animal Farm by George Orwell. It’s a wonderful story about farm animals planning a revolt against their tyrannical human masters. 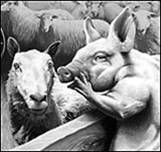