I grew up in the Bay Area in the 1980s, so Bill Walsh is the first coach I think of when it comes to the San Francisco 49ers. He will be greatly missed.

Nicknamed “The Genius” for his creative schemes that became known as the West Coast offense, Walsh died at his Woodside home Monday morning following a long battle with leukemia. He was 75.

“He gave me the opportunity to come to a winner, San Francisco out of Mississippi Valley State University,” [Jerry] Rice said. “I was the 16th player taken in the first round. It was all because of Bill Walsh and what he stood for. I think that was very unique for him, because he could see talent.”

Walsh changed the NFL with his innovative offense and a legion of coaching disciples, breaking new ground and winning three Super Bowls with the San Francisco 49ers along the way.

His middle name was ‘Ernest.’

He received both a bachelors and masters degree in Physical Education from San Jose State in San Jose, CA.

His Masters thesis was titled Defensing the Pro-Set Formation.

For even more on the life and times of Bill Walsh, visit Coach Walsh.com 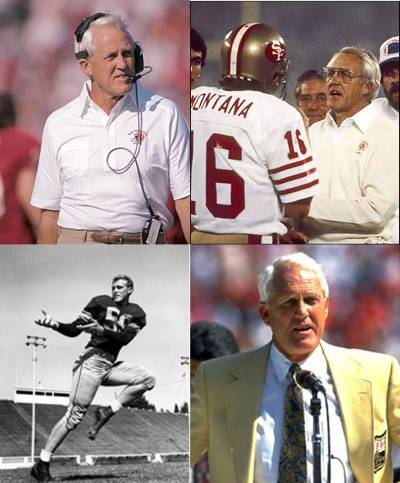