Home
Hollywood Gossip
What The HELL Happened To Britney Spears?

Poor, poor Britney Spears. There’s nothing quite like being the opening act at the MTV Video Music Awards and clearly not giving a crap.

The instant I heard Britney Spears would be opening the 2007 VMAs, I knew it was going to be a train wreck. How could it not? Have you seen what she’s been up to lately?

The whole thing sort of reminds me of when Anna Nicole Smith was on the VMAs shortly after she became the TrimSpa spokesperson. Remember that travesty?

I’m guessing that Britney did not.

Oh how far little Britney has fallen. Remember when…

Remember these? The big winners of the very first VMA’s in 1984…
“China Girl” by David Bowie – Best Male Video
“Girls Just Want To Have Fun” by Cyndi Lauper – Best Female Video
“Legs” by ZZ Top – Best Group
“Sweet Dreams (Are Made Of This)” by the Eurythmics – Best New Artist
“You Might Think” by The Cars – Video of the Year 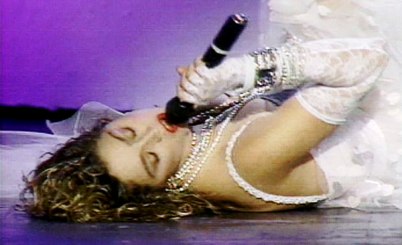