A mention of the late Brad Renfro wasn’t the only thing missing from the Oscars on Sunday night.

Was Whoopi Goldberg snubbed too? Her cohosts on The View sure seem to think so.

…[she] has emceed the Academy Awards telecast four times… the first woman…and the first African-American…even has an Oscar of her own.

So, why was she nowhere to be found in the lingering clips of memorable hosty moments during Sunday’s telecast? (As was, for the record, Steve Martin.)

An emotional Whoopi opened up about the snub on The View today, discussing the great-hosts montage with her cohosts.

“Undoubtedly, I pissed somebody off yet again,” she said, before nearly and clearly choking up.

And then there was the at-home viewing audience – or lack thereof. This year’s ceremony could very well be the lowest rated ever, with only an estimated 32 million viewers (I was one of them).

The low rating may be indicative of the effects of the Writers Guild of America strike on Hollywood. With the strike having ended just days before the broadcast, writers scrambled to put together a full-length program, a rush that was obvious from the unusual abundance of tribute montages. Also, with the drought in original programming on prime-time television, ABC had fewer opportunities to promote the awards show. 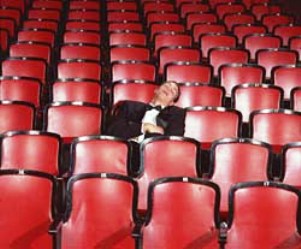