Home
Random Thoughts
Today Is Columbus Day. Do You Know Why?

Christopher Columbus was commissioned by the Queen of Spain to go to India. He missed his target – by a lot.

And now we have a day in October when we observe that mistake. Ahh, America; there’s nothing like rewarding idiots.

Though not the first to reach the Americas from Afro-Eurasia — preceded some five hundred years by Leif Ericson, and perhaps by others — Columbus initiated widespread contact between Europeans and indigenous Americans.

Severely underestimating the circumference of the Earth, he hypothesized that a westward route from Iberia to the Indies would be shorter and more direct than the overland trade route through Arabia. If true, this would allow Spain entry into the lucrative spice trade — heretofore commanded by the Arabs and Italians. Following his plotted course, he instead landed within the Bahamas Archipelago at a locale he named San Salvador. Mistaking the North-American island for the East-Asian mainland, he referred to its inhabitants as “Indians”.

He had three ships and left from Spain;
He sailed through sunshine, wind and rain.

He sailed by night; he sailed by day;
He used the stars to find his way.

A compass also helped him know
How to find the way to go.

Ninety sailors were on board;
Some men worked while others snored.

Then the workers went to sleep;
And others watched the ocean deep.

Day after day they looked for land;
They dreamed of trees and rocks and sand.

But “India” the land was not;
It was the Bahamas, and it was hot.

The Arakawa natives were very nice;
They gave the sailors food and spice.

Columbus sailed on to find some gold
To bring back home, as he’d been told.

He made the trip again and again,
Trading gold to bring to Spain.

The first American? No, not quite.
But Columbus was brave, and he was bright.
Source 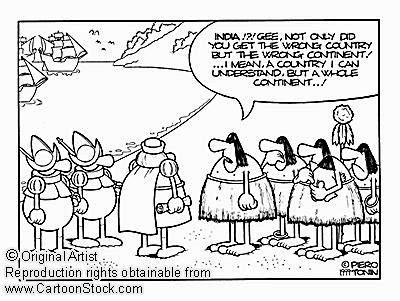