Home
Hollywood Gossip
What Did Nikki Cox Do To Make Her Face Look Like That??

What the bloody hell happened to Nikki Cox’s face? Gag me with a spoon. Seriously!

Those lips are absolutely horrendous. Did she not learn from Priscilla Presley and Lisa Rinna? I’m totally blown away that Nikki Cox and I are the same age and she looks like that.

I would ask what Jay Mohr sees in her, but last night at the People’s Choice Awards he looked pretty scruffy and puffy himself, so I guess they’re both a little worse for wear.

Man! Nikki Cox used to be so hot! I just can’t get over what she looks like now. Her face is like a horror movie – the more it scares me the more I have to look at it.

Check this out…..Jay Mohr is basically the only guy Nikki Cox has been in a relationship with who she didn’t work with on a TV show.

After being romantically linked to Kevin Connolly, who played her brother on Unhappily Ever After, Cox was engaged in 1999 to Bobcat Goldthwait, a comedian more than 15 years her senior, who played the voice of Mr. Floppy, a stuffed bunny, on Unhappily Ever After. She was later linked to her Las Vegas co-star Josh Duhamel. On December 29, 2006, Cox married comedian/actor Jay Mohr in Los Angeles. [Wikipedia] 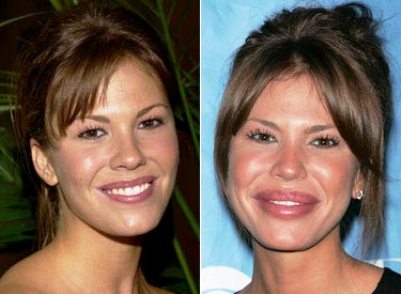