I had so much fun Wednesday night!

My best friend K and I went to the Andrew James Salon in Cupertino, CA and met Leslie Gornstein, E! Online’s one and only Answer Bitch.

Can I just start by saying Leslie is friggin’ hilarious! But I’ll get back to that later. 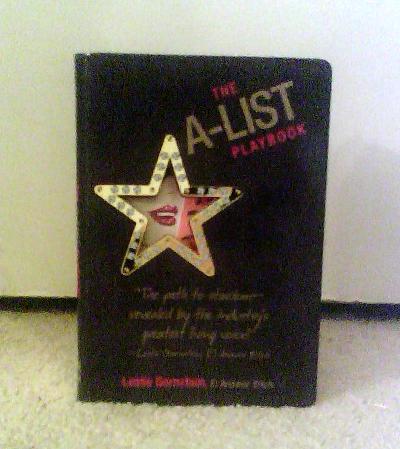 We got there a little after 7:00 and were greeted by a woman named Corinne Phipps; I noticed right away that she was wearing an adorable little green sundress with splashes of gold. Come to find out Corinne is the founder and lead wardrobe stylist for Urban Darling – Wardrobe Consulting and Closet Audits. She’s also quite funny and charming.

I purchased the Answer Bitch’s book “The A-List Playbook” and received my gift bag (which included a bottle of ‘Bitch’ wine). My first official swag! Woo hoo! K and I made our way to the back of the salon where there were drinks a sweets donated by The Constant Baker; there were these chocolate chip shortbread cookies with walnuts that were to die for.

The salon itself, Andrew James Salon, was offering free blow outs, asking just for a donation to a charity dedicated to abused children (they were also doing a raffle, but we didn’t win). K and I were watching some of the ladies in the chairs and noticed that they weren’t taking longer than 20 minutes. Man, I would have been in that chair for at least an hour. How funny we thought, if I were to go over to the chairs with my hair pulled back and act like I have normal hair, and then laugh when they take out the rubber band and realize I have enough hair for three grown women. No, seriously, I have a lot of thick hair on my head.

Ok, back to the Answer Bitch…

I first heard about Leslie being in Cupertino when she Twittered about it. I Twittered her a little message, and she responded. It was a brief interaction that I never thought would sink in. When I went to her to have my book signed and introduce myself, she actually remembered me. “Hilary from Twitter!” she exclaimed and gave me a hug. I have to admit, it makes me smile to know the Answer Bitch knew who I was. Well, at least knew of me.

Anywhoo, she wrote a cute little message in my book and we chatted a little, until she had to go back to schmoozing. Not being one to pass up shameless self promotion, I gave her one of my business cards – it had my picture on it and everything.

A little while later, Leslie read some excerpts from her side-splittingly funny book “The A-List Playbook” – a sort of survival book, telling you everything you need to know if you’re going to make it as an A-list celebrity. 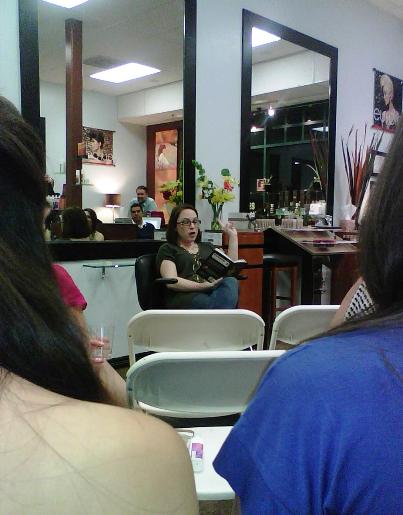 I read the Answer Bitch’s column every day and always find myself laughing. But hearing her in person, speaking her own words in her own voice was almost more than I could handle. There was not a single thing she said that was not funny.

As the evening wore down and people began to leave, K and I hung around a bit to talk to Leslie; and I’m so glad we did. That conversation was very informative and I was given some strong advice; I really appreciated how approachable she was and how honest her answers were.

I would share with you the advice she gave me, but that would be like handing over my playbook to the opposite team. I’ll tell you what – when I’m as big as the Answer Bitch, I’ll pay it forward and let you in on the secrets.

I left the salon feeling like I had just experienced a life changing moment. Sounds cheesy I know; but for someone (me) who wants to be a gossip columnist full time, meeting Leslie Gornstein was like a ray of sunshine on a dreary day. 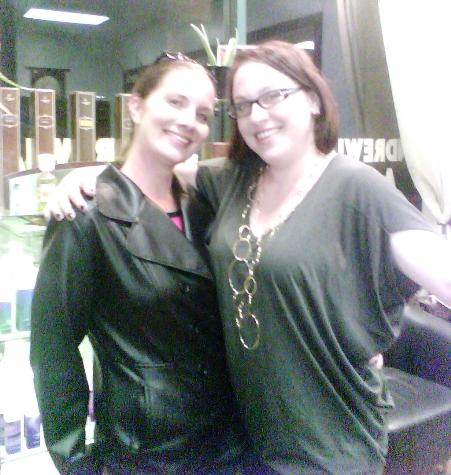 The pictures were taken with my phone, so I apologize for their poor quality.