So this year Walmart is taking a pro-active approach to the Black Friday madness by keeping most Walmart locations across the country open overnight on Thanksgiving. This move comes out of last year’s trampling death of a Walmart employee.

The retail giant said it was hoping the extended hours would prevent long lines from forming because shoppers would be able to wait inside the stores before the chain’s day-after-Thanksgiving specials go on sale at 5 a.m.

I’m glad Walmart is trying to avoid tragedy, but it’s sad that such a thing as trampling someone to death on Black Friday even happens. I’m also pleased that Walmart has released the details of some of the deals early – maybe people will be more prepared when they go shopping this year and there won’t be so much anxiety causing chaos confusion in the aisles.

Wal-Mart Stores confirmed on Tuesday some of the deals it will be pushing to draw crowds for the day after Thanksgiving. It also announced weekly savings starting this Saturday on popular toys and video games that it’s pitching as comparable to the Black Friday sales blitz.

Some of the toys at Walmart stores that will be discounted starting this Saturday through Nov. 27 are EZ Bake Oven, Disney Princess Scooter and Nerf N-Strike Vulcan. The discounts are up to 60 percent. Starting this Saturday, customers purchasing certain gaming packages such as “Band Hero” and “DJ Hero” will receive a $40 Walmart gift card while supplies last. [source]

But the savings don’t stop there! Check out the 7-page Walmart Black Friday ad. 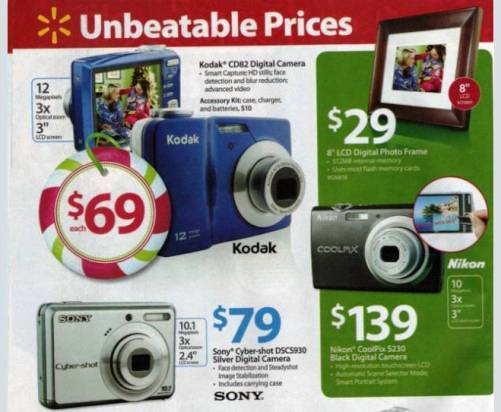