Although no charges have been brought against Dr. Conrad Murray, it’s still official – Michael Jackson’s cause of death is homicide.

More specifically, the King of Pop’s passing was a result of “acute Propofol intoxication” due to an “intravenous injection from another.”

As in another person. As in homicide.

There has been speculation for months that Dr. Murray will be charged with killing Michael Jackson, but it still remains to be seen.

Dr. Murray’s inexcusable behavior goes beyond talking on the phone or falling asleep or whatever on that fateful night – he shouldn’t have been giving Michael Jackson injections of Propofol in his home to begin with.

I’m sure Dr. Conrad Murray did not intend to kill Michael Jackson, but he did nonetheless. And for that he should be held responsible. 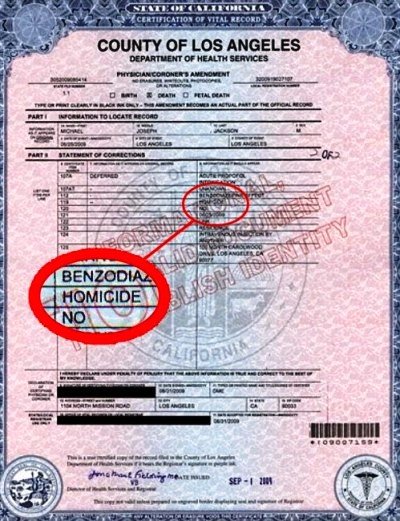 homicide n. the killing of a human being due to the act or omission of another. Included among homicides are murder and manslaughter, but not all homicides are a crime, particularly when there is a lack of criminal intent. Non-criminal homicides include killing in self-defense, a misadventure like a hunting accident or automobile wreck without a violation of law like reckless driving, or legal (government) execution. Suicide is a homicide, but in most cases there is no one to prosecute if the suicide is successful. Assisting or attempting suicide can be a crime.