I would like to start by saying that if I were Courtney Cox, hearing David Arquette tell Howard Stern a whole bunch of way-personal stuff would really piss me off.

That being said, I see nothing wrong with repeating it since it’s already out there.

According to Arquette, the couple split because his wife grew tired of his antics and no longer wanted to be his “mother.” Basically she wanted him to grow the f*ck up.

During the very candid conversation, Arquette, 39, implied that Cox, 46, grew tired of his kooky ways.

For their 11th wedding anniversary this past June, she bought him a motorcycle. “She said to me, ‘I don’t want to be your mother anymore,'” he recalled. “And I appreciated that about her … She didn’t want to tell me, ‘Don’t do that.’ She didn’t want to nag me anymore.”

He also told Howard that at the time of the split he and Courtney hadn’t had sex in four months – but he did bang some random chick.

Arquette explained that he and Courteney stopped having sex around one month before they started shooting “Scream 4” in Michigan … and drifted from there.

…David claims he still loves Courteney — and calls her one of the most amazing people on the planet.

David is also adamant that he never cheated on Courteney before the split — but admits he has had sex with rebound chick Jasmine Waltz … his “one conquest.”

Way to keep it classy there, David! You have now proven that Courtney’s reasons for leaving you are valid. Perhaps you should keep your mouth shut. Just a thought.

By the by, how the hell does Courtney Cox spell her name? Is it Courtney or Courteney?? 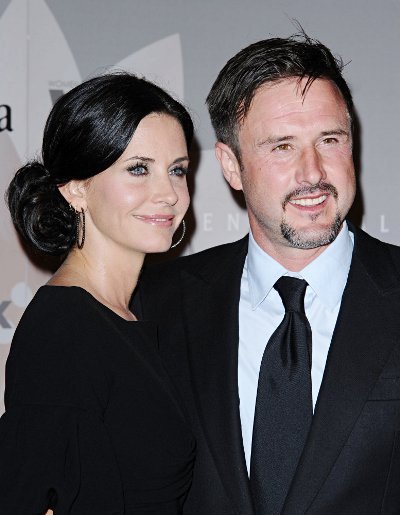