So earlier today my boyfriend and I were discussing the now infamous John Mayer Playboy interview and I was ranting about how disrespectful he was to Jessica Simpson.

We both agree, without a doubt, that John Mayer’s racist rant was completely uncalled for and totally out of line. And although I thought what Mayer had to say about ex-girlfriend Jessica Simpson was also not at all necessary and just plain rude, my boyfriend saw it a bit differently.

While I argued that Jessica Simpson’s level of celebrity does not warrant such private matters to be broadcast, and if John Mayer was talking about someone trashier like Pamela Anderson it would be different, my boyfriend said just the fact that a celebrity is a celebrity makes it okay for their exes to dish the private dirt.

Now today it comes out that Jon Gosselin’s ex-girlfriend Hailey Glassman did an interview with “Steppin Out” magazine, during which she openly discussed their sex life and a bunch of other stuff filed under TMI – like the size of Jon’s penis.

“He was so small I didn’t think he would cheat on me,” Glassman claims.

“He’s hung like a nine-year-old boy,” she snipes. “I’m serious. This is true,” she adds, even claiming he measures up to “3 inches.”

Glassman adds, “anybody who sleeps with him will notice. It’s very noticeable. It’s so tiny, tiny, tiny.” Hailey even said that she “would laugh about it with my mom.”

Hailey must have been pretty open about her disdain for his tiny dick. Jon reportedly said, “You know how subconscious [sic] I am of down there.”

Although I’m inclined to believe Hailey’s claims (it’s been my experience that the bigger the ego the smaller the man-parts), I stand by my belief that such talk by one ex about the other is completely over the line.

Now that a chick is blabbing about the size of her ex’s penis, I wonder if my boyfriend will change his tune. You know, ‘cause it’s one thing to talk about your smokin’ hot ex-girlfriend who was an animal in the sack, but it’s something totally different when the topic of discussion is the size of a man’s d*ck.

Is it just me, or would this picture be so much better if Hailey Glassman’s head wasn’t there. I dunno, there’s just something about her face that doesn’t match her body on the sexy scale. 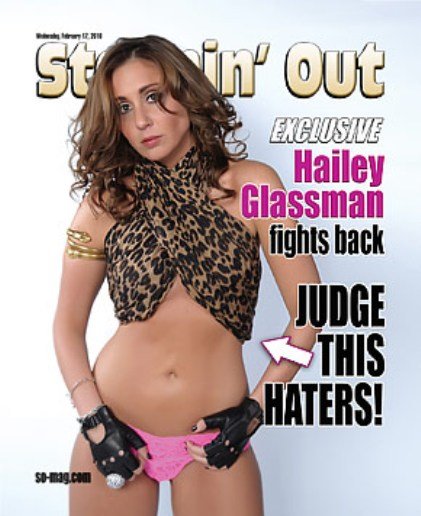