Man, what the heck is Victoria Duffy’s problem? Must she really drag her estranged husband through court while he’s literally dying?

Seems a little cold-hearted and F’d up to me.

The latest episode of the Hopper divorce drama revolves around the way Dennis and Victoria act when in the presence of their daughter.

On Monday Superior Court Judge Amy Pellman told Dennis Hopper and Victoria Duffy to get control over their bitter feelings towards each other for the sake of their 7-year-old daughter. She also ordered the dying actor to pay his estranged wife $12,000 every month to cover spousal and child support, and ruled that for the immediate future Duffy may live on the family property, but she must stay at least 10 feet away from Hopper.

Dennis Hopper, 73, did not attend the hearing but had requested that Victoria Duffy be asked to leave his property.

Pellman addressed Duffy and the family members who were present in court and told them they needed to reconcile their differences before “desperately ill” Hopper dies.

The judge said, “There needs to be street-cleaning on both sides of this street.”

Her thoughts were with the couple’s daughter; she added, “Having her extended family in a war with her mother is not in her best interests.”

Outside court, Duffy told reporters, “It’s heartbreaking and I hope it can be amicably resolved.”

Victoria Duffy is convinced Dennis Hopper is divorcing her in an attempt to cut her out of the will and deny her inheritance. Hopper’s people insist the accusation is not true. 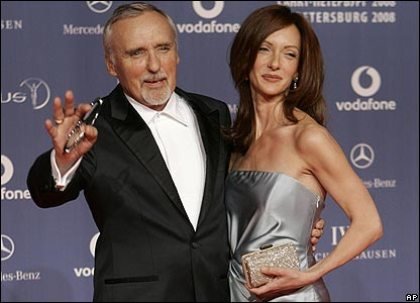