D*mn that Oprah! She gets all the good ones. Herumph.

It was reported Monday and confirmed by Oprah’s production company on Tuesday that Oprah Winfrey has secured the first TV interview with the infamous Rielle Hunter, the videographer who had John Edward’s bastard baby (bastard is the correct word and not derogatory – look it up).

A date for the sit-down interview has not yet been announced.

Apparently Rielle Hunter is a hot item – and not just because he likes to pose half naked with stuffed animals. Competing with Oprah for the “get” were Barbara Walters and Diane Sawyer, but Hunter ultimately went with the big O because she feels the talk show host “was more spiritual and would get her.”

Obviously this interview will be huge for ratings, so I’m guessing it will happen around sweeps week – which I believe falls in May. I think, I don’t know. But I do know that will be plenty of media hype before the interview airs so it’s not like we’ll miss it.

I hope Oprah asks Rielle Hunter what the hell she was thinking getting involved with a man who was not only married, but running for President! Also if she got pregnant on purpose and just how much hush money she accepted.

I’m sure Rielle’s people will send Oprah’s people a long list about all the things that are off limits – and I bet all the really good stuff will be on that list. Booooo! 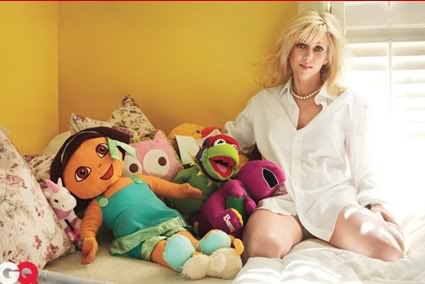