Another season of Survivor has come to end. Tear.

Within the first 20 minutes of the episode the remaining players were stacking dishes on a wobbly arm, trying to last as long as possible without it all crashing down. Stupid Parvati Shallow won.

The first of night’s three tribal councils ended with Colby Donaldson, the last of the Heroes, watching his torch be snuffed out.

Next came the obligatory honoring of the fallen players by the final four, with the torches of names in a giant fire.

That was followed by the next immunity challenge, in which the contestants found themselves running through a maze blindfolded, collecting necklaces. Russell Hantz wins, but just barely.

The next to go was Jerri Manthey; leaving Parvati, Russell, and Sandra Diaz-Twine in the final three.

Of course Russell thought he had the game in the bag, just like he did at the end of Survivor: Samoa, and once again he was wrong. In fact, Russell didn’t receive a single vote to win the million dollars. Ha!

Beating Parvati 5 votes to 4, Sandra came out on top, becoming the first Survivor player to win it all twice.

I guess that makes her the ultimate survivor. And a very rich woman.

“It makes me the queen,” Diaz-Twine said of her two-time win.

A cranky Russell begged to differ, saying, “If she can win the game twice, there is a flaw in the game.” Sour grapes much, Mr. Hantz? 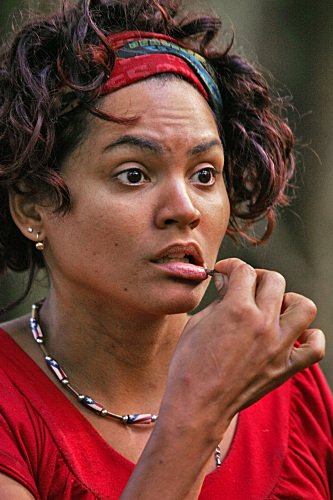