According to the latest issue of Us Weekly, members of Spencer Pratt’s family are finally coming to their senses and realizing that he’s going totally bonkers.

He is estranged from younger sister Stephanie and doesn’t speak to his folks because “he felt his parents would talk to him only about Stephanie and that they charged him with taking care of her,” an insider tells Us Weekly. “He thinks she’s a loser and doesn’t want anything to do with her.”

Apparently, his parents have had it with him as well.

“They noticed him changing two years ago and stayed by his side. But now it’s too much,” a source tells Us Weekly. “They even took the pictures of him out of their home.”

The magazine is also reporting that Heidi, 23, and Spencer, 26, do nothing all day but live in filth and stare at themselves.

…[They have] become virtual shut-ins at their $7,000-a-month rented L.A house, which is filled with framed covers of magazines on which they’ve appeared.

“No one ever visits,” a local tells Us, and the couple rarely leave. “Heidi sits and stares in the mirror, while Spencer plots and schemes on his projects all day,” adds a Pratt source. “He sits on the Internet, watches TV and tries to get press. That is all he does. It’s totally sick.”

Weird … I just had a flash of “Whatever Happened To Baby Jane” pass through my head. Hmmm….. 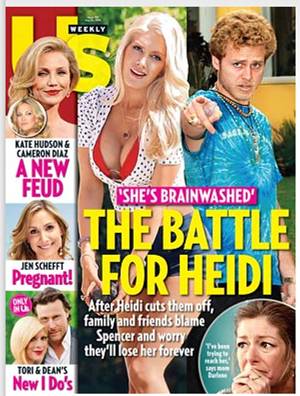