In honor of the day I spent with an extraordinarily crazy man that I must tolerate because he shares a bloodline with my boyfriend, I present to you the latest craziest in the lives of a few celebrities……

While I do not wish the presence of an insane man on anyone, it’s kinda nice to know I’m not the only person with (at least) one of them in my life; although, unlike Halle Berry, I have never had the need to call the police.

The man, who was spotted at the Oscar winner’s Hollywood Hills home twice this past weekend, returned there around 11 pm Monday.

Berry’s private security team saw the man on a security camera as he jumped over a back wall and entered the premises… and called the LAPD, who arrested the man.

He was booked on suspicion of felony stalking and remains in custody at this time.

Police believe the suspect is the same man that the star saw in her backyard on Saturday and Sunday.

In sort-of-but-not-really related black woman/unstable man news, female rapper Nicki Minaj was reportedly punched in the face by a dude at a hotel in Dallas, TX Monday night.

Minaj was hanging out at the pool at a hotel when she got into a very intense verbal spat with an unidentified man she was staying with. Nicki told a hotel employee to call police, while the man went to their hotel room. Nicki then followed the man to the hotel room.

When cops and paramedics arrived, Nicki told authorities their poolside fight continued inside of their room … and the man hit her in her lower lip.

The man had already left the scene when the police arrived but Nicki insisted she did NOT want to press charges. Nicki also claimed she was NOT in a relationship with the alleged attacker.

Next up is perpetual jailbird DMX, who gets to spend an additional week behind bars at an Arizona state prison because he failed a drug test; his new release date is July 19th.

The 40-year-old whose real name is Earl Simmons was given a year in prison in December after his probation was revoked for failing to submit to drug testing and driving on a suspended license. He was credited with 117 days he had already spent behind bars.

…Prison records show he’s also been caught smoking twice and once with drugs since January. He’s been making 20 cents an hour as a porter.

Last, but not least, is our favorite celebrity-nutcase, Lindsay Lohan – who apparently has far more issues than we see on the surface, not to mention a few illusions of grandeur.

…let a reporter follow her around so that she could show everyone how much she’s changed, and since this is Lilo: Fuck-Up Extraordinaire, she ends up coming off as a colossal lunatic.

“In the chauffeured Lincoln Navigator, it was all about puffing Parliament Lights and Miami chitchat with her entourage. Lindsay traveled with a revolving pack of pseudo-chaperones, whose most responsible member was her 17-year-old sister, Aliana.”

“As we pulled up to the Fontainebleau, a bright-orange parking cone was blocking the entrance,” Powers writes. “Not accustomed to waiting, apparently, she lowered the car’s window and shouted, ‘Move that cone. I’m Lindsay Lohan.’

(Be sure to click the source link and read the rest – it’s crazy!) 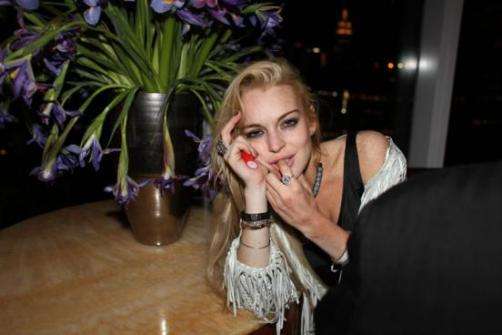