On this day in 1988, Geraldo Rivera’s nose was broken during the taping of his talk show, giving the phrase ‘Trash TV’ a whole new meaning, and paving the way for stellar programs such as Jenny Jones and The Jerry Springer Show.

Everything was going as well as could be expected (you know, given the amount of ignorance and hate on the stage) until Metzger referred to Innis as “Uncle Tom.” Then, as they say, all hell broke loose. (Check out the video below.)

“I’m sick and tired of Uncle Tom here, sucking up and trying to be a white man,” Mr. Metzger said of Mr. Innis, the national chairman of the Congress of Racial Equality. Mr. Innis stood up and began choking the white youth and Mr. Rivera and audience members joined the scuffle, hurling chairs, throwing punches and shouting epithets.

No other injuries were reported and no one was arrested, the police said.

“These racist thugs are like roaches who scurry in the light of exposure,” Mr. Rivera said after the brawl. As Mr. Rivera scuffled with one of the white supremacists, another hit him in the shoulder with a chair and then smashed his nose with a roundhouse punch from behind.

Mr. Rivera, who used to be an amateur boxer, decided not to go to the hospital because he had two more shows to tape. Emergency Medical Services paramedics pronounced his nose broken, the show’s executive producer said.

Mr. Rivera said he would not press charges. “I do not want to be tied up with the roaches,” he explained.

He said he approved of Mr. Innis’ actions, noting that “if there ever was a case of deserved violence, this was it.” 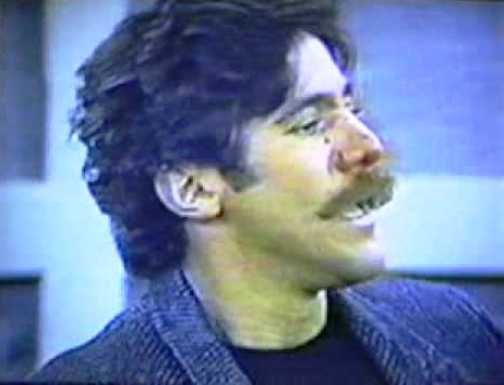 Here’s the video of the fight. Pretty tame compared to today’s daytime TV standards, but it created a ton of controversy at the time.