I don’t know about you, but I was really thrown for a loop when I found out that Eddie Murphy and Melanie “Scary Spice” Brown were a couple. Then news came that they were expecting a child together. Now it’s being reported that they are no longer an item, and what’s more, Eddie Murphy, 45, is dropping hints that the baby Mel B is supposedly carrying is not his. I say supposedly because Melanie, 31, has not actually confirmed that she is pregnant.

In an interview that was meant to help promote the new movie Dreamgirls, in which Eddie Murphy has a major role, he appeared on the Dutch TV show RTL Boulevard, and when asked about his relationship with the pregnant Melanie Brown said, “We’re not together anymore…and I don’t know whose child that is, until it comes out and has a blood test. You shouldn’t jump to conclusions, sir.”

Eddie Murphy isn’t the first celebrity, and certainly not the first man, to question paternity. A few years ago, American film producer Stephen Bing denied that he was the father of Elizabeth Hurley’s son Damian (which, by the way is a horrible name to give a child), until testing proved otherwise. I believe Heidi Klum’s ex, Flavio Briatore, tried to claim that he wasn’t Leni’s father, but I don’t think he got very far with it. On the other side of that coin is Larry Birkhead, who claims that he is in fact the father of Anna Nicole Smith’s infant daughter, not Howard K. Stern, and is demanding a DNA test.

How long do you think before Mel B shows up on The Maury Povich Show asking for help to find her baby’s daddy? 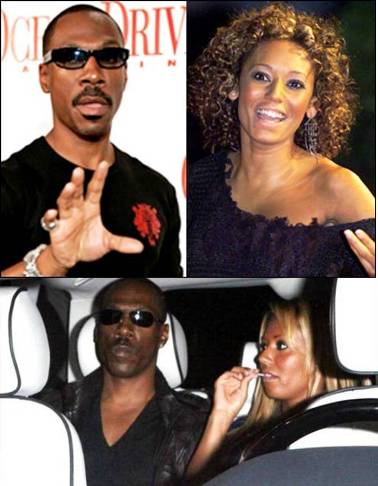