Angelina Jolie and Brad Pitt made their first official appearance as a couple at this week’s NYC red carpet premier of The Good Shepherd.

In the new issue of Vogue magazine, Angelina Jolie, 31, speaks a little of how she and Brad Pitt, 43, fell in love and how it was never her intention to ruin his 5-year marriage to Jennifer Aniston, 37. “I didn’t know much about exactly where Brad was in his personal life. But it was clear he was with his best friend, someone he loves and respects,” Jolie said in the interview. “I think we were the last two people who were looking for a relationship. I certainly wasn’t,” she says. “I was quite content to be a single mom.”

She goes on to say that while filming Mr. And Mrs. Smith, they grew closer but it was not until after Brad Pitt and Jennifer Aniston announced their separation that Jolie and Pitt starting seeing each other romantically. Angelina credits her son Maddox for actually bringing Brad Pitt into the family after he called Brad dad one day while playing.

Blah, blah, blah. Say whatever you want Angelina Jolie — you’re still a home wrecker. And Jennifer Aniston was right when she told Oprah that Brad Pitt has a sensitivity chip missing. The only reason I don’t totally hate Angelina is because I think she actually understands that she has a greater purpose in life than just acting. And I really think the family on a whole is adorable. I’m pretty sure that if it weren’t for the kids and the charity work, I would feel much differently about Angelina Jolie.

I am so glad I found these pictures of the couple’s biological child, Shiloh. I was beginning to think that she didn’t exist or something. Shiloh Jolie-Pitt is a beautiful child, born into a beautifully interracial family.

All that being said……enjoy these pictures of the beautiful Jolie-Pitt family. 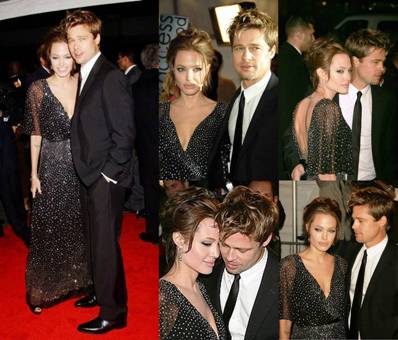