In September 2007 Paris Hilton sued Hallmark Cards Inc for $500,000 because they made a greeting card that stole her trademark line, “That’s hot.”

For some crazy reason it has taken two full years for an appeals court just to make a decision on whether or not Paris Hilton may proceed with her lawsuit.

Take a gander at the Paris Hilton Hallmark Card in question:

The courts have taken Paris Hilton’s side.

The 9th U.S. District Court of Appeals on Monday upheld a lower court’s ruling allowing the bulk of Hilton’s lawsuit. Hallmark has defended the card as parody, which is normally protected under fair-use law. [source] 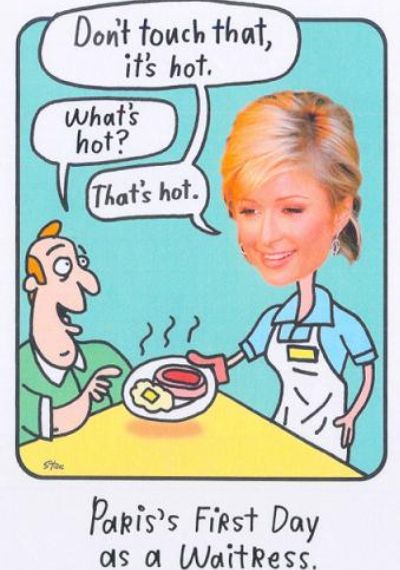 The appeals court rejected Hallmark’s argument that the card was sufficiently “transformative” as to deserve automatic protection because the setting was different and the phrase “that’s hot” referred to the temperature of a plate of food.

While noting differences from the TV show, including that the cartoon body was of a generic female and not Hilton, Judge Diarmuid O’Scannlain said “the basic setting is the same: we see Paris Hilton, born to privilege, working as a waitress.”

He concluded that Hilton “has at least some probability of prevailing on the merits before a trier of fact.”