Remember a couple of weeks ago when I told you that Elisabeth Hasselbeck may finally be leaving The View? Well from the sound of things today, there may be more truth to that rumor than I previously thought (and hoped for).

Apparently the recent political discussions that have been going on between the ladies of The View have made Elisabeth Hasselbeck “really upset” because she feels she can’t win.

As the lone Republican on the talk panel — not to mention the youngest — she just can’t seem to win against her loud, liberal counterparts Joy Behar and Whoopi Goldberg.

While tensions are high on set, a “View” staff member told the Chicago Sun-Times that things aren’t as bad as they were during the Rosie O’Donnell era. Still, it’s bad enough that Barbara Walters has set up a “cooling off” meeting for her ladies.

Is Elisabeth Looking for a New ‘View’?

Boohoo Elisabeth! The View is a show about current events and currently the events surround the elections; and politics make everyone’s blood boil, thus creating passionate debates. Brush up on your debating skills and maybe you’ll win one!

If you can’t stand the heat, get out of the kitchen and go over to FOX News where you’ll be with your own kind.

Or take a long walk off a short pier – that works too. 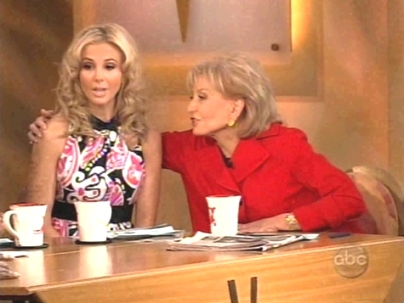