Anna Nicole Smith’s body has been transported to the Bahamas for her burial today. Although she will finally be in the ground (I wonder how nasty her corpse is), she will still not be resting in peace.

The battle continues. According to the news blurb I just heard, Daniel’s biological father is now in the mix. He wants Daniel’s body to be exhumed (gross) and sent to Texas — along with Anna’s body — for burial together there. Um, excuse me Billy Smith, but where were you last week when all this burial stuff started?

I am still on Larry Birkhead’s side. Howard K. Stern is an evil jackass and Anna Nicole’s mother totally rubs me the wrong way (especially now that Billy Smith is involved).

And I STILL don’t understand why the paternity test has not yet been done. Think of all the questions that would be answered! My only thought is that Howard is scared to death that the truth will come out and his spiral downward would really begin.

You’re going down, Howard K. Stern! It’s just a matter of time. You better hope Anna Nicole doesn’t contact a medium while she’s on the other side. The dead may hold secrets, but they can still be found out by the living.

If I had my way, Howard K. Stern would be found responsible for both Daniel and Anna Nicole’s deaths and sent to prison, and Larry Birkhead would get custody of HIS baby. 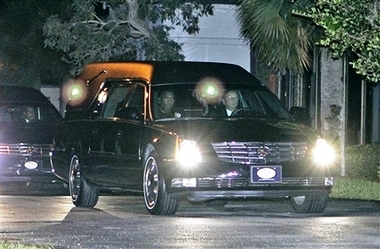