Face it Johnny boy, America is fixated on celebrities – including those celebrities famous for being famous; so who better to run our country than a celebrity?

By the way Mr. McCain, the fact that you’re known the world over makes you, by definition, a celebrity.

Not one to back down from a catfight, Paris Hilton has released an awesome response to John McCain bringing her into the race for President…

He’s the oldest celebrity in the world. Like super old. Old enough to remember when dancing was a sin, and beer was served in a bucket. But, is he ready to lead?

Hey America, I’m Paris Hilton, and I’m a celebrity, too. Only I’m not from the olden days and I’m not promising change like that other guy. I’m just hot.

But then that wrinkly white-haired guy used me in his campaign ad, which I guess means I’m running for President. So thanks for the endorsement, white-haired dude, and I want America to know that I’m like totally ready to lead.

And now I want to present my energy policy to America, just as soon as I finish reading this article on where I can fly to to get the best tan.

I heard somewhere that a sense of humor is a sign of intelligence. The video clearly displays Paris Hilton’s sense of humor – so does that mean the woman who coined the phrase “that’s hot” is actually more intelligent than we all thought? I mean, only a genius could come up with a line like “see you at the debates, @@@@@es.” 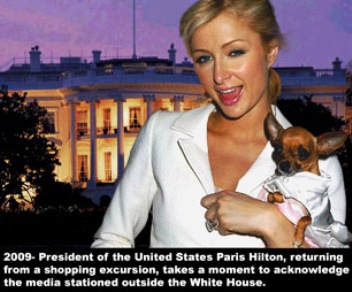