For shame! For shame! So not cool man. There are unspoken rules at things like this. And you go stepping over the line! For shame!

That’s what I would have said to Paul Addis, the 35 year old (mellow harsher) from San Francisco, if I were there when he set the man of Burning Man on fire four days too early.

Many festival-goers who were awake watching Tuesday’s lunar eclipse said they saw a man deliberately ignite the figure at about 3 a.m., Grace said.

“It was in plain sight of many people,” she said. “Everyone is looking at it this morning, this big black figure in the sky and that wasn’t supposed to burn, saying, ‘Now what do we do?'”

Here’s a picture of the guy. Wonder what he’s on. Still no excuse though. Burning the man before it’s time is some bad joo-joo if you ask me. 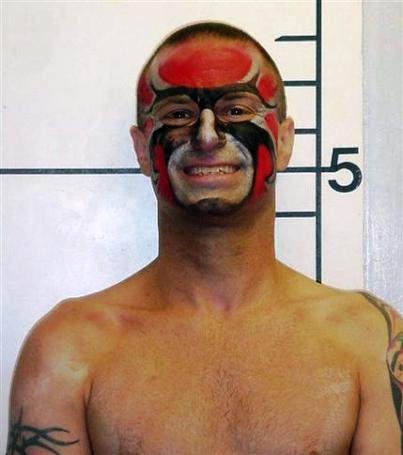 Perhaps this will help us understand the mind of Paul Addis…

Twelve weeks ago we recorded an interview with Paul Addis — the man who burned the Man and was promptly arrested for arson. And even back then, he was constantly flicking his lighter… performing as Hunter S. Thompson in a one-man show (a local newsweekly said it “feels like a reckless, all-out verbal assault”) called “Gonzo: A Brutal Chrysalis,” and was discussing his idol…Burning the Man With Hunter S. Thompson – 10 Zen Monkeys