Well folks, the road to that world has already begun (some would argue that it actually began about seven years ago)…

President George W. Bush told a group of New York school kids on Wednesday: “Childrens do learn.” … During his first presidential campaign, Bush — who promised to be the “education president” — once asked: “Is our children learning?” … The White House opted to clean up Bush’s diction in the official transcript. “Childrens do learn,” Bush tells school kids

What they’re not telling you is that “clean up” really means “altered.” Transcripts altered* by The White House? Why am I not surprised? Makes you wonder what other things might have been altered, don’t it?

9. “As yesterday’s positive report card shows, childrens do learn when standards are high and results are measured.” –on the No Child Left Behind Act, Washington, D.C., Sept. 26, 2007

5. “Too many good docs are getting out of the business. Too many OB-GYNs aren’t able to practice their love with women all across this country.” –Poplar Bluff, Mo., Sept. 6, 2004

4. “Our enemies are innovative and resourceful, and so are we. They never stop thinking about new ways to harm our country and our people, and neither do we.” –Washington, D.C., Aug. 5, 2004

2. “Brownie, you’re doing a heck of a job.” –to FEMA director Michael Brown, who resigned 10 days later amid criticism over his handling of the Hurricane Katrina debacle, Mobile, Ala., Sept. 2, 2005 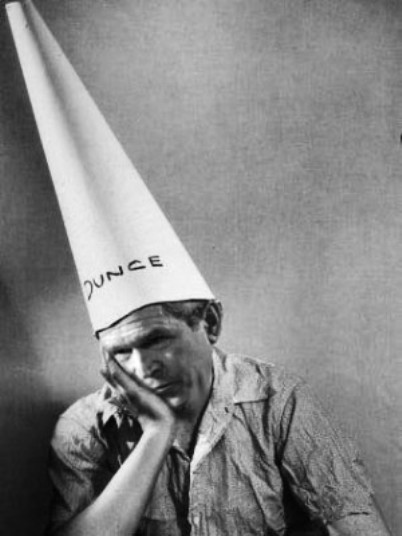