“I ate everything, we don’t have the money for special foods so I just ate potatoes, noodles and tomatoes,” she told the reporter, adding that all her previous babies had weighed more than 5 kg. Russian woman’s 12th baby weighs in at 7.75 kg 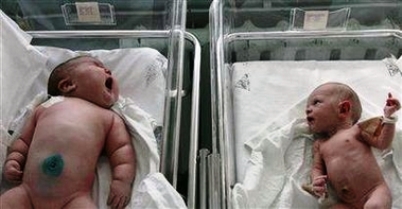 Wow! And I thought Super Tonio was a big baby!

…about the average size of a six-month-old… boy’s 38-year-old mother is diabetic, a condition which can commonly cause women to give birth to larger babies. The boy, named Ademilton dos Santos… is the heaviest baby ever born in Brazil, according to Brazilian medical officials. MSNBC Health

Siberia is bigger than Canada.

Most cities in Siberia exist because the communist leaders decided to build them to exploit natural resources. Once built, Russians were rounded up and forced to move.

Siberia contains the largest flat plain in the world.