This news may not have come as a surprise to you, but it certainly did Hulk Hogan, who was informed by a reporter that his wife Linda has filed for divorce.

What a crappy way to start the holidays. I wonder if it has anything to do with the fact that their daughter is a ogre whore and their son is a jail bound reckless idiot.

Hulk Hogan, whose real name is Terry Bollea, told the St. Petersburg Times that he had no idea his wife had filed for divorce. He was informed by a reporter that Pinellas County court records showed that the paperwork was submitted Tuesday…

“My wife has been in California for about three weeks. … Holy smokes,” Bollea later told the newspaper. “Wow, you just knocked the bottom out of me.” 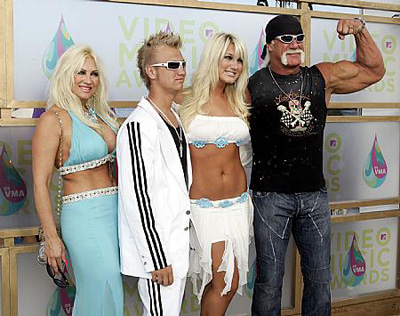 He was in Rocky III, playing a wrestler named Thunderlips – he was paid $15,000.

He had a restaurant in the Mall of America called Pastamania, which opened in 1995 and closed in less than a year.

As a boy he was on a little league team and was teased endlessly for being fat.

His red underwear is his “lucky” underwear because he was wearing them the two times he’s been in a plane crash. Now he doesn’t fly without wearing them.

Before becoming a professional wrestler, he played the guitar professionally for ten years.

He was one of the first wrestlers to have music playing as he approached the ring.