The extremely troubled Britney Spears was allowed to see her two sons for three hours today. Britney’s father Jamie was there, as was the fallen pop star’s psychiatrist.

Kevin Federline’s bodyguard dropped the boys off at Britney’s house around 9am and came back around noon to pick them up.

…lawyers for Spears and Kevin Federline reached a visitation agreement Friday, the pop star saw her children Preston, 2, and Jayden, 1, for the first time since Jan. 3…

…A source involved in the case says, “The real hero was [Spears’s father] Jamie. He has taken charge, and she has visitation again.”

Britney Visits with Her Boys

Being allowed to see her children, if only for a few hours, is an excellent step for Britney. I really don’t care if she “hates” her father, the man is setting her straight and screwing her head back on. And for that, everyone should be thankful.

A picture speaks a thousand words: 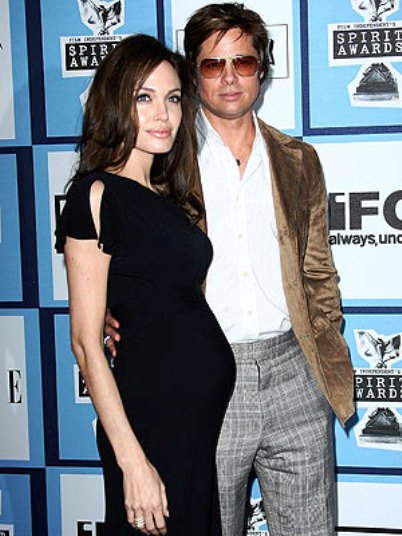 A source close to the couple tells PEOPLE that Angelina Jolie and Brad Pitt are “thrilled to be adding to their brood.”

Jolie’s baby bump was the buzz on the blue carpet Saturday as she stepped out in a curve-hugging black dress at the Film Independent’s Spirit Awards with Pitt.

The Jolie-Pitt family currently consists of Maddox, 6, Pax, 4, Zahara, 3, and Shiloh, 1. Last week the couple’s adoption of Pax was made official.

Adds a source close to the couple, “They are very, very happy.”

Jolie-Pitts ‘Thrilled To Be Adding to Their Brood’