It is often said that if one does not learn from history, they are doomed to repeat it. So what does it mean when history isn’t exactly repeated, it’s just full of crazy coincidences?

Have a history teacher explain this – if they can.

Both were particularly concerned with civil rights.
Both wives lost their children while living in the White House.

Now it gets really weird.

Both assassins were known by their three names.
Both names are composed of fifteen letters.

Now hang on to your seat.

Lincoln was shot at the theater named ‘Ford.’
Kennedy was shot in a car called ‘Lincoln’ made by ‘Ford.’

Booth and Oswald were assassinated before their trials.

And here’s the kicker… 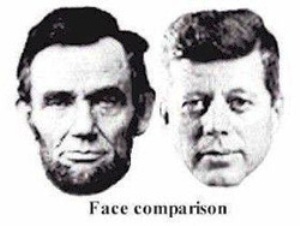 Memorial Day is a United States Federal holiday observed on the last Monday of May (in 2008 on May 26). Formerly known as Decoration Day, it commemorates U.S. men and women who perished while in military service to their country. First enacted to honor Union soldiers of the American Civil War, it was expanded after World War I to include American casualties of any war or military action.