And if what they’re saying is true, I don’t blame her one bit.

Reality show whore Megan Hauserman, who has appeared on Beauty and the Geek, Rock of Love, I Love Money, and Charm School is alleging that during the Charm School reunion show last Saturday night, Sharon Osbourne jumped off the crazy train, ran across the room, and attacked. Megan claims that Sharon grabbed her weave, err, I mean hair, and refused to let go, and that Sharon kept going until security finally pulled the two apart. Megan Hauserman went to the hospital the next afternoon, and filed a report with the LAPD Sunday evening.

And why did Sharon Osbourne attack Megan Hauserman?

According to Megan, Sharon took a verbal shot at her – Megan responded by telling Sharon Osbourne that she’s only famous for managing a brain dead rock star; to which Sharon responded by going medieval on Megan’s head.

Although I don’t condone violence, I can certainly appreciate a good chick fight – and this one was a doozy; I can’t wait until the video of it hits the airwaves. And in my personal opinion, Megan totally deserved it. I mean, how dare she say such a thing to the one and only Sharon Osbourne. Seriously.

Check out the gnarly picture of Megan’s head HERE.

Adrienne Curry, another reality show veteran, blogged today about her friend who saw the whole thing told her.

A friend of mine attended the taping of Charm School Rock Of Love Reunion the other day. Megan, the prissy stuck up @@@@@y hot chick that wants to be Paris Hilton got her ass beat by Sharon! I guess she decided that ripping on a woman who is 1898837337375357 times more amazing and classy than you’s husband (who happens to be the F@@king Prince Of Darkness) is a GOOD idea! She told Sharon that she was married to a brain dead drug addict. Sharon poured her shake on the broads head and then beat the @@@@ out of her. You might as well threaten The President Elect!

Sharon is a Tyrant in the industry. She is well respected by just about everyone. She is NOT someone you f@@k with. Congrats, Charm School chick…whatever career you MAY have once had is up in smoke. Watch, I bet the chick sues Sharon, hence making her public enemy number one. If you got beat up by a broad 30+ years older than you, take it like a f@@king woman and leave it be. You deserved it. 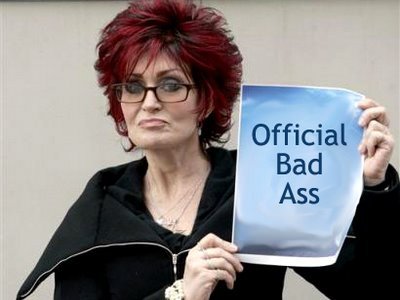