Ok, I understand that celebrities grow tired of cameras in their face and people following them around.

But come on! Does it really call for assault?

Last night at New York’s La Guardia airport a TMZ photographer spotted Woody Harrelson, so he did his job and followed the actor while asking questions.

First Woody shoved the camera into the photog’s eye, causing it to temporarily stop recording. The video comes back for a second before the screen goes black; you can hear Woody Harrelson attacking the cameraman and ripping the camera out of the photographer’s hands.

Woody Harrelson then smashes the camera on the ground and walks off. The photographer follows Woody saying that the actor has assaulted him, and demands that Woody give the camera back.

Woody then attacked the TMZ photog again, striking him several times and grabbing his neck. The attack was recorded on the photographer’s flip cam.

Throughout the scuffle, the photographer repeats over and over that Woody is assaulting him and pleads for him to stop.

I watched the video, and Woody Harrelson clearly assaults the TMZ photog. I wonder if Woody will be charged like Kanye West was.

This is not the first time Woody Harrelson has attacked a TMZ cameraman. In 2006 he choked the cameraman and broke his camera. 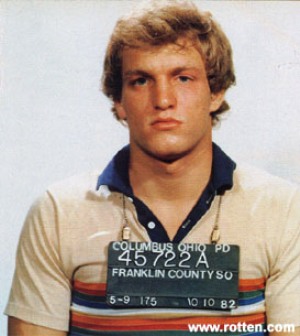