Lindsay’s crazy this I know,
For her best friends tell me so.

Lindsay Lohan’s closest friends say that not only is Lindsay totally distraught about her split from Samantha Ronson, but she’s lost complete control of her life. Oh, and that she’s totally mental and needs help.

“Lindsay is on hiatus with her publicist because she’s not working or booking jobs. She is completely unmanageable…Lindsay needs to get psychiatric help. Her friends are really sad for her, but she’s out of control, and now she’s all alone,” a source close to the highly troubled actress said.

Wow, Lindsay’s friends are sad for her, they know she feels all alone, and instead of comforting and supporting Lindsay, they run to the media. With friends like these, right? Geez.

Since Lindsay Lohan apparently doesn’t have any real friends standing behind her and actually supporting her instead of blabbing about her, she’s been hanging out with her mother. Which we all know is a horrible, horrible idea since Dina Lohan is a clearly unclear on the whole being a mother and not a friend to party with thing.

Lindsay’s sister Allie seems to be the only one who is actually being supportive.

I think it’s starting you guys. I think Lindsay may actually be on the road to a train wreck. Come on Lindsay, you can do it – go crazy!! 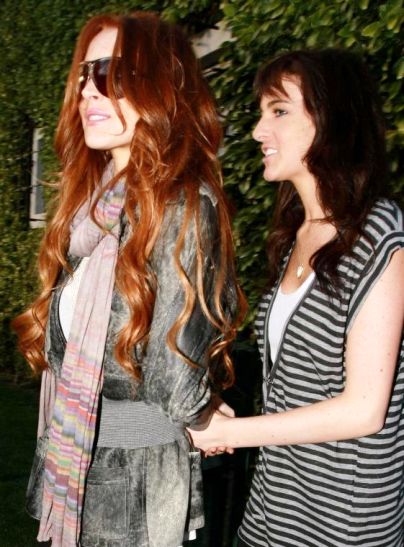