So what happens when a TV show that is narrated by one of its characters (Mr. Belvedere, The Wonder Years, How I Met Your Mother, Grey’s Anatomy, etc.) loses that character?

What happens to the show? Does another character take over the narration?

Tonight is the 8th-season finale of the very funny Scrubs, and the main character – who is the narrator – is leaving. So now what?

Dr. John Dorian (played by Zac Braff) is leaving Sacred Heart (and the show) tonight. Does that mean the show is over? I’m serious.

Scrubs wraps up its eighth season tonight as J.D. prepares to leave Sacred Heart and fantasizes about finally landing a hug from Dr. Cox and learning the Janitor’s real name. But leaving the hospital isn’t the only change in store for J.D. as Elliot slowly begins moving her things into his place, a clear sign that she’s changing the course of their relationship. More than 50 past guest stars turn out for tonight’s finale, a fitting tribute to this quirky and heartfelt show.

It says “wraps up is eighth season” so that means it’s just the season finale, not the series finale, right?

This is really the only answer I could find:

Braff is definitely leaving, taking his J.D. character with him, but Scrubs may yet find a way to stay on life support, with its cast of supporting characters – including possibly Vancouver’s Sarah Chalke – intact. ABC unveils its fall schedule on May 19, and the late word is that Scrubs may not be scrubbed after all. In an uncertain economy and a Darwinian environment where most new, untried TV shows fail, ABC may choose to stay with an old reliable, a modest hit that has been entertaining an average 5 million viewers a week in the U.S. since its debut in October, 2001, just three weeks after the 9/11 terror attacks. [Source]

Guess we’ll just have to wait and see (boooooo!). And keep checking back with the Scrubs website to see if the synopsis on there changes.

Scrubs focuses on the unique point of view of Dr. John Dorian, or “J.D.” (Zach Braff). After surviving his internship and residency at Sacred Heart Hospital, J.D. is now an attending physician with his own class of interns to guide and mentor. Even though J.D. has risen in the hospital ranks, he will continue to face many challenges in both his personal and professional life. Joining the rumpled J.D. at Sacred Heart Hospital are Dr. Chris Turk (Donald Faison) — J.D.’s college buddy who is part of the elite surgical group, Turk’s wife, the no-nonsense head nurse, Carla Espinosa (Judy Reyes), as well as the beautiful, but socially awkward, Dr. Elliot Reid (Sarah Chalke). Former Chief of Medicine Dr. Bob Kelso (Ken Jenkins) now keeps a watchful eye on the hospital staff from the coffee shop. Meanwhile, the caring yet abrasive Dr. Perry Cox (John C. McGinley) is struggling with an identity crisis as he reevaluates his career, and, the hospital janitor (Neil Flynn) and J.D.’s nemesis, who never seems to miss an opportunity to harass his target. 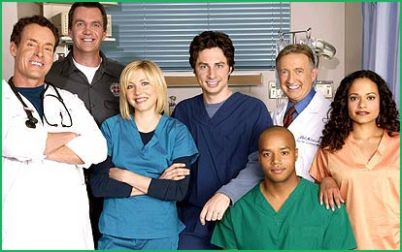