I don’t know much about Heidi and Spencer Pratt, other than they’re from an MTV “reality” show and they’re totally fake, extremely annoying, and very obviously fame parasites.

Now I can add despicable and spoiled human beings to that list. And I’m using ‘human beings’ very loosely.

I’m A Celebrity…Get Me Out Of Here is basically Survivor for B and C-list celebrities, with the contestants fighting to win money for their specified charities.

The first episode wasn’t even over before the Pratt brats threatened to quit twice.

Tidbits about the premiere…..

Poor Heidi is @@@@@ing because her boots and socks are wet. She looks like she has Vaseline all over her face.

Spencer prays out loud to God asking for him to help his wife. These two always pray out loud, so everyone can hear. Nothing is sacred. 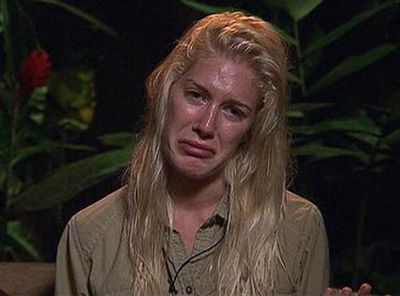 It was sad yet beautiful, like a painting made by a retarded elephant, or a one-legged homeless person trying to dance, or a prayer circle with Spencer Pratt and Heidi Pratt and Rod Blagojevich’s wife, heads bowed in shared cultural martyrdom. The last of which did, in fact, happen on the show. It really was a perfect sequence, the bad, tacky clowns of TV, magazines, internet, and politics, tied to the whipping post of American popular opinion together, hands held, eyes weepy, praying that the Lord give them strength in the wilderness.

During one of the Pratt’s temper tantrums, the other celebrity contestants ransacked Heidi’s belongings and stole her dry shampoo.

Once the newlyweds came back to the campsite, an enraged Spencer smacked a water bottle from the hands of Frances Gallier, one half of the Vh1 comedy duo Frangela.

Pratt also hid wrestler Torrie Wilson’s bag away from the campsite in retaliation.

Explaining his actions, Heidi said: “My husband is a very new Christian.”

Ok, so that was last night’s premiere show.

Today the saga of Heidi and Spencer continued…..

The Hills actor and actress have walked off the set in Costa Rica after Pratt, in a major snit, declared, “If you give me a script I’ll do what you want, I’m not a reality star.”

It appears Pratt doesn’t take direction well and isn’t comfortable improvising. If it isn’t written down, and he isn’t fed his lines, he is totally clueless. This could be a publicity stunt but then again, one can expect just about anything from this pair.

Then sometime this afternoon it was reported that Speidi wanted back in…..

“We’re begging NBC to let us back in!” Spencer said in an email to Extra Tv late Tuesday. Extra sources claim the couple is waiting for a helicopter to taken them back to the set as we speak.

According to I’m A Celebrity…rules, the couple cannot return to the show unless the cast agrees. America may also be asked to vote on whether they can come back as well.

But it’s too little too late for the Pratt brats – they’ve already been replaced…..

Additionally on Tuesday, a show source told Access that Holly Montag, Heidi’s sister and fellow “Hills” castmate, may be joining “I’m A Celebrity.”

“Holly is on a plane [to Costa Rica],” the source said.

The source added that Holly is “appalled at what her sister faced” in the jungle thus far and she wants to redeem the family name for charity.

People magazine also reported that Daniel Baldwin, brother of current jungle-dweller Stephen Baldwin, may be heading into the jungle as well.

The second episode has come to an end, and the Pratt brats have ridden off into the sunset in a limo with Spencer proclaiming, “I don’t volunteer baby, I get paid!”

And now I must excuse myself so I can go vomit.

Spencer and Heidi Pratt can tell me they’re all that and bag of chips until they’re blue in the face, but I know the truth – they’re just a couple of mouth breathers. 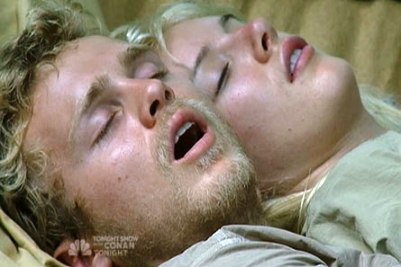