Anne White was warming up in a tracksuit for her match against fifth seed Pam Shriver in the first round at Wimbledon 1985 when she removed her suit and revealed an all-white lycra unitard.

Being 1985, it created quite a stir among the crowd and photographers.

Play was stopped for the day due to bad lighting with the match tied at one set all. The umpire Alan Mills instructed Anne White to wear a more appropriate outfit the next day; she did, and lost the third set.

Later Anne White was quoted as saying, “I had no idea it would be so controversial.”

Sports Illustrated ran an article about Anne White and her bodysuit in their July 8 1985 issue.

After Anne White defied Wimbledon convention by wearing a bodysuit, her sexy attire was banned. But White had joined the pantheon of pioneers

Women’s tennis was saved the other day at Wimbledon from Christinalova burnout. Forget Chris and Martina. And forget Pam Shriver, who described Anne White’s dazzling, curves-embracing, fortnight-stopping alabaster body stocking as “stupid,” “bizarre” and “this thing.” Thing? Off with Shriver’s tongue. Tennis has seen the future and it is wow.

White, of Newport Beach, Calif., is tall, blonde and a free spirit who is ranked No. 93. But: “Go for it, Whitey,” friends encouraged her.

It was just one more miserable wet evening at Wimbledon when White suddenly appeared on Court 2: white on White from plunging neckline to twinkling toes. Men gasped. Buoyed by the suit and the crowd support, White won a second-set tiebreaker against Shriver after having dropped the first set 3-6. But then night fell, and Wimbledon banned White’s whites—“not traditional tennis attire”—for the next day’s final set, which she lost.

“I didn’t want to cause anybody to spill their strawberries and cream,” said the latter-day Gussy Moran. “But I think I showed a lot of guts.” Not to mention some dynamite something elses. 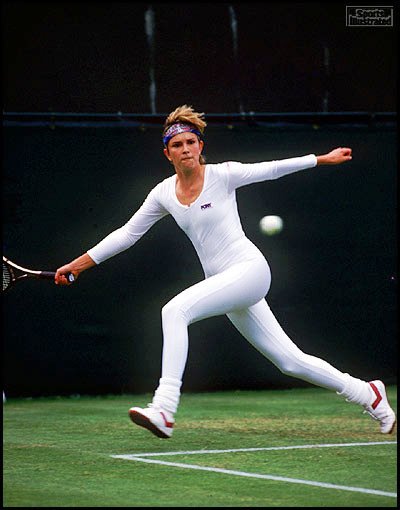 It’s hard to believe that a tennis player dressed head to toe was considered sexually provocative when we now have female players like Serena Williams and Anna Kournikova. 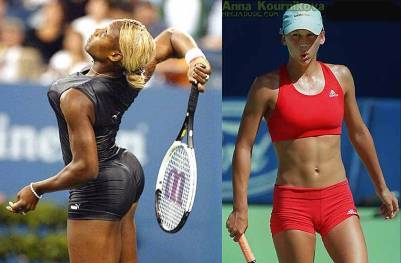