Too bad basically half the world won’t be able to see it. Unless they watch a solar eclipse 2009 live webcast, that is.

The total solar eclipse on July 22 2009 is visible within a narrow corridor that traverses half of the Earth, where the Moon’s umbral shadow begins from northern Maldives, northern India, eastern Nepal, northern Bangladesh, Bhutan, the northern tip of Myanmar, central China and on to the Pacific Ocean, Japan’s Ryukyu Islands, Marshall Islands and Kiribati.

Don’t worry if you won’t be able to see it happen live, you can watch the solar eclipse online.

Please note: Online viewing time may vary depending on the broadcasting location, generally falling between 8:10 PM to 11:05 PM (EDT) or 5:10 PM to 8:05 PM (PDT) on July 21, 2009 for broadcast originated from China, earlier in India or later in Japan.

National Astronomical Observatory of the Chinese Academy of Sciences (Multi-site from Wuhan to Shanghai Federated Live Broadcast of Solar Eclipse on July 22, International Year of Astronomy 2009):

The path of the July 22 eclipse: 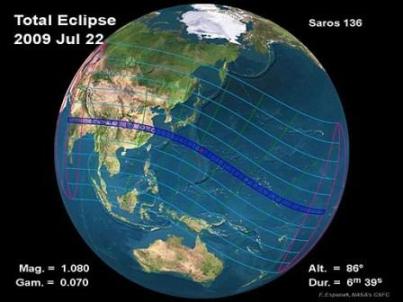