I know this story is already three days old, which in Hollywood gossip terms means it’s totally old news, but I wanted to put in my two cents nonetheless. So there.

In what some people (like me) might see simply as another step on her rocky road back to relevancy, Lindsay Lohan has again sparked controversy with the publication of a photograph.

This time she appears on the cover of the French magazine, Purple, dressed all in white standing against a white backdrop, with her arms outstretched to her sides and a thorn crown on her head.

And that, apparently, is the problem; according to some contemptuous Christians, anyway.

Bill Donohue (which I kept reading at Phil Donohue for some reason) is the head of the Catholic League and finds the timing of the magazine cover especially tacky and thinks Lindsay Lohan could use a little Christian love in her heart.

“Not only is the pose inappropriate, the timing is offensive.” (Catholicism’s most sacred season begins next Wednesday — Ash Wednesday — with the start of Lent, the annual period of pentinence and abstinence that leads up to the Easter celebration.)

Recently Lohan indirectly referred to Hinduism by Tweeting that she’s “all about Karma…what goes around comes around.”

“If she believes that, then it behooves her to apologize to Christians before it’s too late,” Donahue said, adding that she is ‘spiritually homeless’ and ‘would benefit by converting to Christianity.’

Am I the only one more bothered by the asymmetry of Lindsay Lohan’s sleeve buttons than I am the Jesus pose? 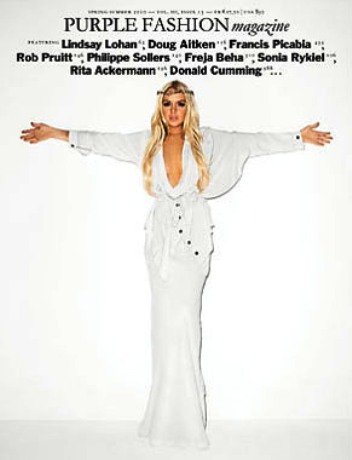