After eight years of courtship and just over a year of engagement, Harrison Ford, 67, has married his lady love Calista Flockhart, 45, in New Mexico.

According to the Associated Press, it was a very small ceremony – presided over by the Governor of New Mexico, Bill Richardson.

Congratulations to them both!

Harrison Ford and Calista Flockhart are one of those Hollywood couples who stay under the radar, and outside of a sporadic tabloid breakup story here and there, they’re pretty much left alone. I’m not at all surprised they had a small wedding, in fact.

While this is the first marriage for Calista Flockhart, it is Harrison Ford’s third.

Why did they get married in New Mexico, you ask?

Well apparently the couple is in New Mexico while Harrison Ford films the sci-fi action drama Cowboys and Aliens, with Daniel Craig.

Calista Flockhart adopted a son in 2001 as a single mother and named him Liam. In 2002, she met Harrison Ford at the Golden Globes. They have been together ever since, with Ford happily helping to raise Flockhart’s son. At one point there was talk of Harrison Ford adopting Liam, but I don’t know if that ever actually happened. 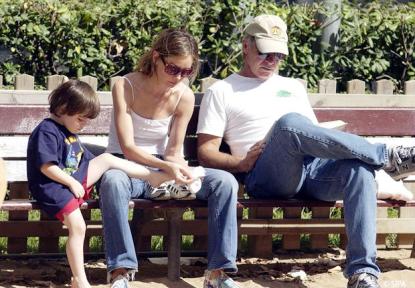