These are the facts: I’ve known forever that Calvin Klein was gay. His marriages didn’t fool me one bit.

Calvin Klein married Jayne Centre in 1964, they had a daughter named Marci, and divorced in 1974. In 1986 Klein married Kelly Rector and stayed with her until 1997.

Apparently Calvin Klein is finally comfortable in his own skin (nothing is coming between him and his Calvin’s), and has been parading his new found life all around the world.

Namely, Nick Gruber; a mere 21-years-old to Klein’s 68. The age gap isn’t as bad as the one between Hugh Hefner and his practically-a-teen fiancée, but it’s still cringe worthy.

Friday night, Calvin Klein is throwing a huge 21st birthday bash for Nick Gruber – he even bought out the entire restaurant for the night. The invited guests are the crème de la crème of the New York fashion seen. According to a source, the invite reads:

“In the spirit of the New Year and in celebration of Nick Gruber’s birthday, please join Calvin Klein for dinner and drinks at Indochine Jan. 21 at 9 p.m. It will be the hottest ticket for New York’s gay and fashion elite.” The source quipped, “Expect all of the velvet mafia to be there.” [source]

We don’t know where or when or how Klein and Gruber-London-Skyline-Oo got in touch and started shacking up, but at some point, while transitioning from Skyline to Gruber, he appears to have gotten some cosmetic procedures. His teeth didn’t straighten out and his nose didn’t get slimmer all on their own, that’s for sure. 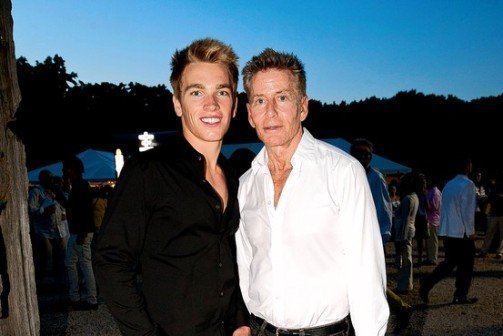