Another day, another celebrity filing for divorce; but this one is slightly different.

Instead of sighting the boringly traditional (and highly annoying to me) “irreconcilable differences,” actress model Elizabeth Hurley is claiming “unreasonable behavior” as the reason for her request for divorce from husband of four years, Arun Nayar.

I don’t know what is meant by “unreasonable behavior,” but it sounds juicy. And that’s all that really matters, quite honestly.

Especially since it was Hurley herself who attracted the negative media attention last December when it was rumored she was fooling around with Australian cricket star Shane Warne after they were photographed kissing outside a London restaurant.

In an effort to quell the chatter, Hurley defended herself via Twitter saying, “For the record, my husband Arun and I separated a few months ago. Our close friends & family were aware of this.”

Elizabeth Hurley recently filmed a part in NBC’s Wonder Woman, and in the coming weeks is expected to headline several high profile events in New York.

She also visited Twitter again to address rumors that she and Warne were tying the knot, “Apparently I’m getting married & moving to Australia…Wow, my fictional tabloid life is exciting! Breathlessly awaiting next installment…”? 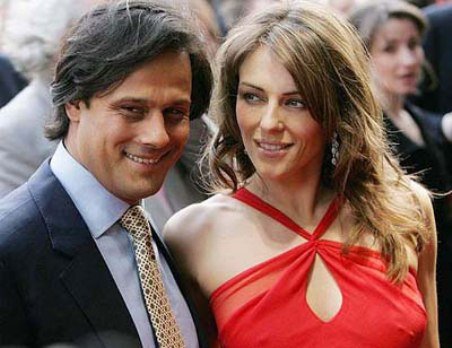