On this day in 1981, the Kim Carnes rendition of “Bette Davis Eyes” returned to the #1 spot on the Billboard music chart.

First written by Donna Weiss and Jackie DeShannon in 1974, “Bette Davis Eyes” was originally sung the same year by DeShannon on her album New Arrangement; but it did not receive great commercial success until Kim Carnes recorded her version five years later, and it spent nine-consecutive weeks on top of the U.S. Billboard Hot 100.

After the song’s top-spot streak was interrupted by the “Stars on 45 Medley” for a week, “Bette Davis Eyes” returned to the Billboard throne.

According to producer Val Garay, the original demo of the tune that was brought to him sounded like “a Leon Russell track, with this beer-barrel polka piano part.” Keyboardist Bill Cuomo came up with the signature synth riff, using the then-new Sequential Circuits Prophet-5 synthesizer, which now defines Carnes’ version. The song was recorded completely live in the studio on the first take.

– Bette had several nicknames in Hollywood including: “Queen of Hollywood”, the “First Lady of the American Screen”, and “the Fifth Warner Brother”.

– In 1941, Bette Davis [was] elected as first female president of the American Academy of Motion Picture Arts and Sciences.

– When Bette Davis found out that her new brother-in-law was a recovering alcoholic, she sent the couple a dozen cases of liquor for a wedding present.

– Bette’s last film was Wicked Stepmother in 1989. She walked off the set of the film, but the scenes she had already shot were used in the movie anyway.

– The epitaph on her tombstone reads “She did it the hard way.” 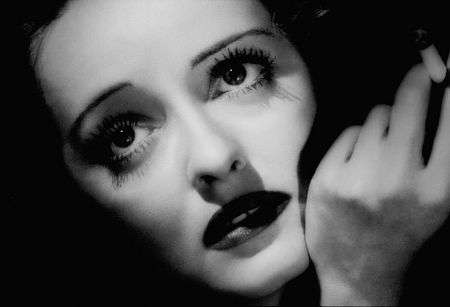