Actress Cameron Diaz is what they call “scary pretty.” She is a living, breathing testament to the plain and simple fact that there’s a paper-thin line between gorgeous and hideous. With her high cheekbones, prominent mouth and a nose that must have once belonged to a prizefighter in another life, this woman can walk with her chin held high in both universes – the one for ugly people and the one for the beautiful members of the species. I think she’s a fairly good actress – I especially liked her in “There’s Something About Mary” and “Gangs of New York” and I’m sure she’s a ton of fun to hang out with. But, her facial features are so drastic that if she’s not photographed in just the right light, she can look like The Phantom of the Opera with a hangover. One of the benefits of looking the way she does means Diaz can get roles in films playing the not-so-pretty girl, like she did in “Being John Malkovich.” Diaz has been linked romantically to some hot guys and was going out for quite a while with Justin Timberlake until it fell apart rather suddenly. Maybe Justin woke up one morning and saw Cameron with her hair akimbo and without any makeup and decided he no longer wanted to date The Joker. Poor girl – it’s got to be tough straddling the ugly/beautiful fence. Other celebrities who suffer from this same ying-yang, good luck/bad luck looks kind of thing include Jerry Hall (Mick Jagger’s former wife, if you forgot); Mickey Rourke, Cher and Suzanne Somers. I kind of feel sorry for them – until I look at myself in the mirror. Ouch!

This post was written and copyrighted by Ed Attanasio. For more of Ed’s rantings, visit his blog, Life on the Edge. 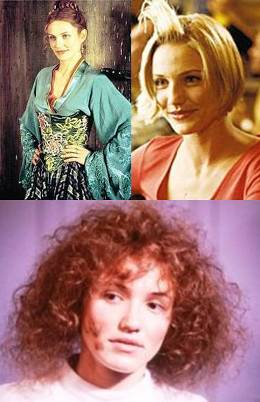