I find it interesting that the clips of the Donald Trump and Rosie O’Donnell brawl seem to be getting more air play than the scuffles between the Democratic candidates for president.

What does Hillary have to say that can surpass Isaiah Washington’s comments about Patrick Dempsey and T.R. Knight? If Mayor Giuliani can learn to drop as many F-Bombs as Eminem, then mainstream America will listen.

Maybe because it is like a Shakespearean play or a Greek drama – – jealousy, betrayals, pettiness, backstabbing, insults, romantic intrigue and, of course, fame and fortune. In a world of globalization, celebrities are now the “small town” gossip. And to top it off, we chose sides! Why do I think Denise Richards should be the victor in her row with Heather Locklear? Uhh, because Denise was oh so cuter in her cameo on Friends that Heather was on Scrubs.

And who should win the Democratic nomination for president? Well, if Barack called Hillary a “fire crotch”, then maybe I could figure it out! 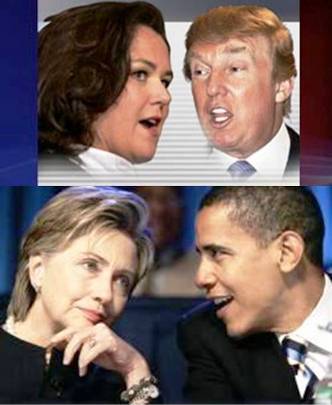