Home
Random Thoughts
Memorial Day Is More Than Just A Paid Day Off.

It’s the day to honor the thousands of men and women who have lost their lives in the name of American Freedom.

If you know me at all, you know that I do not support the current war in Iraq, but I DO SUPPORT THE TROOPS. The soldiers of our armed forces have some of the hardest jobs there are. I cannot imagine having to leave me family for extended periods of time, never knowing if I would make it home in one piece, if at all. My father was in the Marines, my uncle was in the Navy, both served in Vietnam and were fortunate enough to make it back alive. One of my grandfathers served in WWII, the other was a Seebee in Korea.

The military life is a hard one, but a very honorable and respectable one.

When we gather around our flag,
our heart beneath our hand.
a prayer should be on our lips
for the veterans who took a stand.

On the ramparts of Fort McHenry,
the bloody battlefields of ol’ Bull Run,
atop of San Juan Hill,
the muddy trenches of World War I,

They stood on the decks of destroyers,
hunting the U-boats down.
The wards of a dim lit hospital,
where weary nurses are found.

They rushed the beaches of Normandy,
flew bombers over Japan,
defended South Korea,
walked the jungles of Vietnam,

They were forced to crouch in cages,
their hands were bound with rope,
still they honored God and Country,
and filled our hearts with hope.

They scorched across the desert sands,
in Black Hawks on patrol.
They served this Nation proudly,
on the doomed USS Cole.

Our freedom is not our birthright,
and courage knows no gender.
Our freedom is bought by veterans,
who stand instead of surrender. 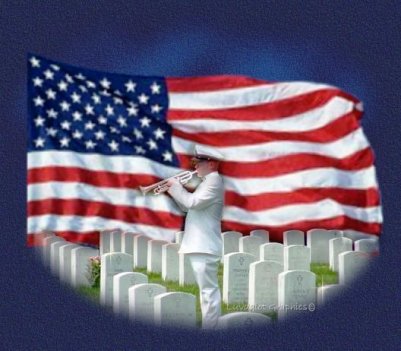