I really don’t have anything witty to say about this one. I think it’s just sad.

A member of my family was diagnosed with Bi-Polar when he was 45. And that was only because his father checked him into the VA against his wishes. It was one of the best things to happen to this relative; at that point, there was no denying that he had a problem.

There is now no denying that Britney has a legitimate problem – more than just having too much money and not enough sense. And I think if she got the right help for the right problem, she could make a great comeback and once again be the Britney Spears that everyone loved to love – not loved to hate. 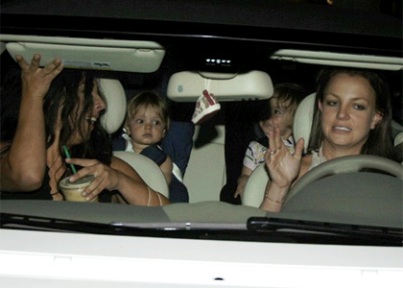 Check out these symptoms of Bipolar I Disorder, and then try to convince me Britney Spears doesn’t suffer from it…

Mania: feelings of heightened energy, creativity, and euphoria; talking a mile a minute, sleeping very little, and hyperactivity…cognitive changes include grandiosity and feelings of omnipotence, reckless and impulsive behavior, and a very short temper…lashing out at those who don’t go along with their plans, and blaming anyone who dares to criticize their behavior…there is typically a lack of insight and judgment during a manic episode…help by the suffering is rarely sought after because they feel great and don’t recognize that anything is wrong.

Depression: likely to include symptoms of low energy, moving and speaking slowly and sleeping a lot, and psychotic depression (losing contact with reality). Can often be very severe and include thoughts of suicide, requiring hospitalization.