Imagine for a moment that you’re Kid Rock and you’ve just released your first album to hit No. 1 on the pop charts. You’ve given a concert in Atlanta, GA and are now enjoying a nice meal at a local Waffle House with a bunch of your friends. Other than drowning waffles and grits with cheese in syrup, what’s the best way to celebrate?

How about a good old fashioned rumble?

DeKalb County police said they arrested Rock, 36, and five members of his entourage at 5:15 a.m. after an argument with a man who entered the Waffle House escalated into a fight.

“Rock along with five members of his entourage were charged with one count of battery, which is a misdemeanor. The victim … was treated and released at a local hospital for his injuries,” Mekka Parish, spokeswoman for DeKalb police, said.

The musician and his buddies took off in his tour bus, but only got about a mile down the road before they were pulled over and arrested.

Judging by the look on Kid Rock’s face in his latest mugshot, I’d guess he enjoyed his evening all the way to the end. Nothing says ‘great night’ like a swollen eye and ratted hair. Right, ladies? 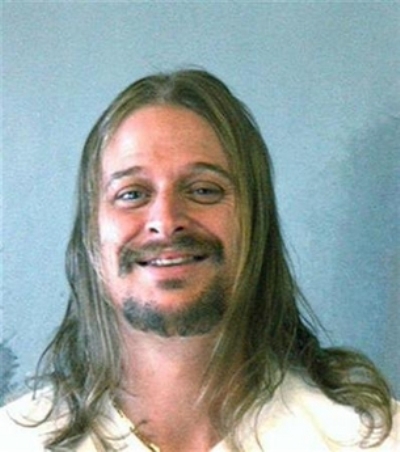 P.S. Is it just me, or could Kid Rock totally be Jesus for Halloween? Except for the violence part, of course.