Happy Birthday Tyra Banks! You’ve done quite well for yourself in your first 34 years…Supermodel, Talk Show Host, Reality TV Star. Not to mention being the ex-girlfriend of a professional basketball player. Of course, a lot of girls can say that, so maybe that’s not really an accomplishment. But at least when it went sour you held yourself together and didn’t go all crazy and whacky like some people we know.

You’re ahead of the game, Tyra Banks – here’s to your next 34 years!

Fun facts about Tyra Banks:
She went to a Catholic girl’s school and has always maintained that her classmates were ruthless; constantly making fun of her because she was tall and skinny.

Her first week in Paris, designers were so taken by her presence on the runway that she was booked for 25 shows, an unprecedented record in the business for a newcomer.

She was the first African American woman on the covers of GQ, the Sports Illustrated Swimsuit Issue, and the Victoria’s Secret catalog.

Oh so much more about Tyra Banks and her TV shows….
TyraBanks.com
The Tyra Banks Show
America’s Next Top Model 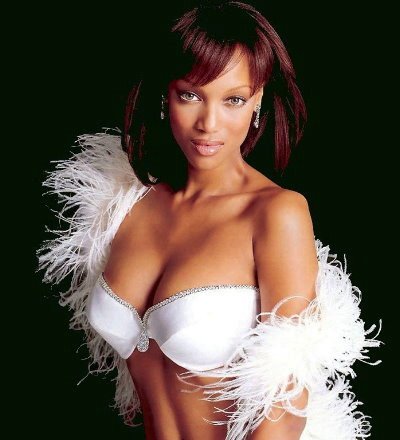 Tyra Banks loves Spanx! And so will you! Spanx.com